The little cinema was packed,

even if fictional, films about the locality were rare.

And later, in the bar there was much discussion.

The shots of the sheep blocking the road were appreciated.

Well, our sheep were famous for their techniques of blockade.

This was no fiction.

There was insider knowledge here!

It was the mass action that was shown.

It brought the occupants out of their cars

to wave their arms and shout in angry frustration.

But the individual acts of defiance by escapees

This was considered regrettable.

It was felt the film should have acknowledged the action

on the tarmac while the cars stopped

and drivers moved rapidly from

and then to arm waving and shouting outside,

There was no discrimination, after all.

the ewe would eyeball them all impassively.

Locals just drove round her.

But the main discussion centred on the two elderly sisters

who lived up the mountain.

They drove a very old car.

One of them had learned to drive in the War

and no one had thought to check if she still held a licence.

she could still drive well enough

Her sister could see fine.

And even though she could not drive

she was adept at giving instructions.

Well, it was only fiction!

The audience doubted it.

All could almost remember these women,

as they argued happily

about the identities of the eccentric drivers. 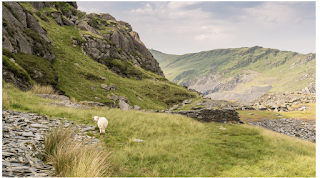