The Grey Men
It was an ordinary outing to the cinema
for the little girl and her mother.
But first, the Pathe News
showing a large meeting -
“the United nations”, her mother said.
A fat, bald mad was shouting angrily.
Then he took off his shoe
and banged it on the table.
Next came a shot of the listening faces.
Grey men - well the film was black and white,
but she thought they would be grey even in Technicolor.
They were frozen speechless with shock.
“What’s it all about?” she asked her mother.
It seemed he was angry because
of some perceived injustice or hypocrisy.
It sounded reasonable to the little girl.
“But it just isn’t done”, said her mother.
“you just can’t do that. Not there.
Not in such a place”.
“But he did do that”, said the little girl.
And she thought of the shocked expressions
on the faces of the faceless grey men
and thought:
“I would do that”.
She pictured them again
and thought:
“I will do that”
and I think she did.
The grey men are still with us,
but the shoe thumpers are still
splashing
the palette with colour.
https://www.storynews.net/the-grey-men/

Gloria
I called the doll Gloria.
I no longer know why.
My father bought her for me
on a trip to the seaside,
on my first trip to the seaside.
I was bored with the endless sand
and the cold grey sea
and with the effort of pretending
to enjoy myself
on my expensive treat,
at the seaside.
We went to a toyshop after
and my father bought me the doll.
I called her Gloria.
I no longer no why.
Perhaps it was the name he suggested.
Or maybe my mother suggested it
when I couldn’t decide.
I don’t remember.
But I remember the doll.
She had real hair that I could comb.
But it turned out to be plastic,
nylon, I think.
And
after I had combed it a few times,
the whole lot came off leaving her bald.
Yes
without her wig she was completely bald,
my Gloria.
http://www.quailbellmagazine.com/…/poem-gloria-by-lynn-white 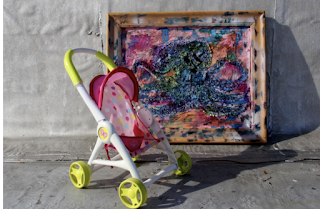 Next Time
It was a hard landing but I’m all in one piece
and maybe, I’ll have fallen on my feet
and be able to try again,
to make it an opportunity to build something better
when I step in from the cold.
Are you coming with me?
https://the13alphabet.wordpress.com/…/the-2nd-issue-of-bon…/

About This Website
THE13ALPHABET.WORDPRESS.COM
The 2nd Issue of BONSAI JOURNAL: Read It Here
Welcome to the Second issue of BONSAI journal (a part of The 13 Alphabet Magazine), an online magazine dedicated to the creative. Featuring creatives in the fields of literature & arts. And to …

The Old Curiosities Shop
“Curiouser and curiouser”, cried Alice
as she rummaged through the remnants
of other people’s lives,
now offered for sale,
to become part of
another person’s life.
“Curiouser and curiouser”, she said
holding up two fat schoolboy
salt and pepper pots.
“They look like real characters,
I shall name them Tweedle Dumb
and Tweedle Dumber,
for now.”
She searched in vain for a looking glass
to see if she could walk through it.
She had heard this was sometimes
a curious possibility.
But among the objects in a large shiny bag,
she did find a set of playing cards
with a fearsome looking Queen of Hearts.
“I could write a good story about her”,
she thought.
She found the butler with his empty tray
somewhat unsatisfactory.
So she removed the tray
and hung a tape measure round his neck
and put a thimble on his finger.
Now he could measure his former master
for a new suit, she thought.
She was pleased with the transformation
and thought that maybe it was now time
to transform herself.
She undressed
and donned a little black dress
that she found in the shiny bag.
She painted her face
and covered her blond hair
with a dark wig
in a new style.
Such a pity
that there was no looking glass
for her to view her appearance.
She could only imagine
her new self.
Such a pity
that no one
would ever see
what she had created.
That no one
would ever know.
Or so she thought.
http://theweirdreader.com/ 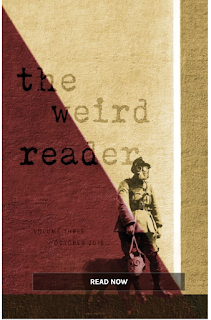 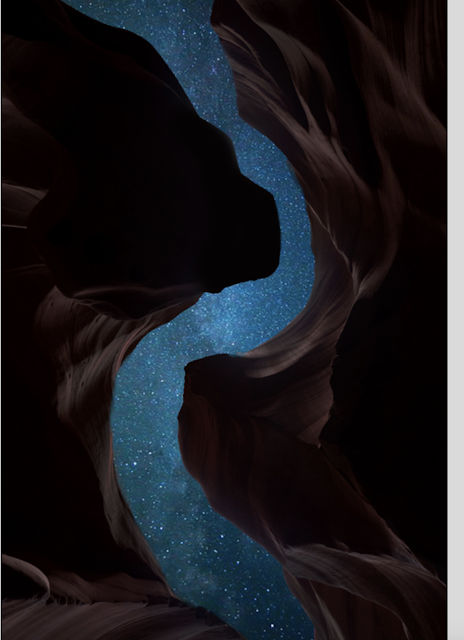 Photo Opportunity
I watched the man crossing the path
underneath the cascade of the waterfall.
It had been part of the route wine was carried
from the high lands, to be sold on the coast.
Back in the old days, that was.
But the old days weren’t very long ago.
He seemed confident
as he placed a foot carefully
in each of the footholds
hacked into the precipitous rock face.
He gripped the thick metal hawser
attached to the rock with strong
metal rings.
Gripped it firmly
and proceeded slowly
one step at a time.
I had a camera
and I thought
that it was a picture he would like to have
when he was dry and safe back on terra firma.
Then I thought,
suppose he falls,
falls into the waves,
to be smashed against the rocks
far below.
I didn’t want to have such a picture,
a picture of someone’s last moments
and I thought,
to take it
may jinx his journey
and even cause him to fall.
So I never took the picture.
But it made no difference.
The man fell anyway.
First published in Bold + Italic, Issue 2, 2018
https://boldplusitalic.wordpress.com/issues/issue-02/p03/

Sea Horse
It was on the first day of our seaside holiday
that I found him
washed up,
stranded,
spat out by the sea
and swimming alone in the rock pool.
I had never seen a sea horse before,
only pictures in a book.
I used my shoe to fish him out
and ran back quickly,
one shoe on and one shoe off,
before the water leaked out.
I put him in the sink
and watched him swim.
He didn’t seem quite right.
Or maybe it was the pictures that were wrong,
or my memory.
He couldn’t stay in the sink.
My mother made that quite clear.
So I found him a jar in the cobwebby shed
and put him in that.
I fed him on bits
of bread,
minced meat
and mashed banana.
He spat them all out angrily.
I thought he would die from lack of food
and my mother said he couldn’t come home with us.
So I took him back to the waters edge
and released him,
gave him back
to the sea.
The next day I found him lying on the pebbles.
The sea had rejected him,
spat him out,
just as he had spat out my food offerings.
I carried him back,
in my shoe again
and put him
back
in the jar.
I’m older now and when I look at him,
I’m wise enough to know
that he is no seahorse,
but not wise enough
to know his name.
Only that the sea rejected him,
spat him out,
as he had rejected me.
http://theweirdreader.com/
THEWEIRDREADER.COM
The Weird Reader – A literary magazine full of the strange, disturbing, fantastic, and otherworldly.
We’ve all been scared at one time or… 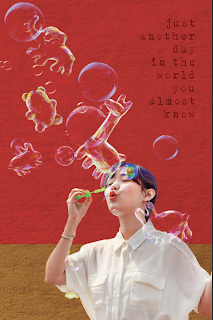 A Timely Revolution
“I’m late,
I’m late again”,
said the White Rabbit
staring at his pocket watch
with exasperation.
He turned the minute hand back a little
and perused the new time
with satisfaction.
He knew the effect would be limited,
that there would be no revolution
in time
unless
he could turn back the hands
on all the clocks everywhere,
but it made him feel better
briefly.
He had pondered this issue of time
many times.
He knew that the revolutions of clocks
and watches were irrelevant
to it’s passing,
which made him feel better
about his manipulation.
Philosophically speaking,
he knew that he could change the time.
He could break the watch and freeze it.
Break all the wheels that revolved inside.
Smash them to smithereens.
But even then,
even when
broken,
he knew
the wheels of time would keep turning,
that even,
given time,
there would be no timely revolution.
The wheels would still turn
time after time.
https://blognostics.net/…/a-timely-revolution-by-lynn-white/

In the Clouds
I’ve seen a dragon in the clouds
and a humming bird
and a tea table
set for tea.
Some say they’ve seen Christ
or Mohamed,
or fairy kings and queens.
They have all stayed a while,
my shapes in the cloud.
None have left.
Not until now.
Now,
when I saw the man
with his tufts of hair
growing haphazardly
here and there.
With his open red mouth already blooded.
With the sunlight shining through his eyes.
I have never seen such colours in the clouds.
And now
he seems to be leaving,
not blown away,
but stepping out
looking
hungrily towards me.
http://www.lulu.com/…/the-g…/paperback/product-23685698.html 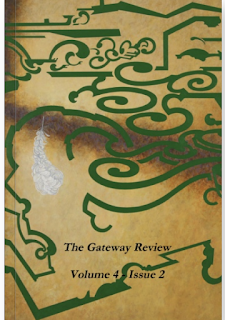 Closed
It was a beautiful village,
the sun was shining,
the mountain air pure,
a perfect place for a coffee.
We could see two cafes,
but the first we tried was closed,
closed for a while by the looks.
The second looked hopeful
with tables and chairs outside
but the door was locked.
An elderly man came over and explained.
that it only opened at weekends.
The other had closed because
the people had left the village.
They all want to live in the town,
he told us
and now the houses are empty
and there are just a few tourists
who come at weekends to drink a coffee
or a beer.
He told us to sit at a table
and went into a house
across the street
and returned with a tray
and three good French coffees
made in his own kitchen.
So we sat in the sunshine
breathing in the pure mountain air,
a perfect place for a coffee
with our new friend.
https://www.erothanatos.com/vol2issue4