The Sound of Silence
Silence is complicated.
It can be comfortable and companionable
like the silence between us now.
We see others though, where silence rests heavily,
as they seek speech to bridge the gap
of discomfort, which lies uneasily between them.
We will not allow this silence space,
Worse is the fear of a future silence, a cold space,
where we have nothing to say to each other.
A silence where we are still together, but distant, remote,
without feeling, drifting into our private spheres,
that we do not want to share. No touching warmth,
but a place where we are unable to excite each other
even with conversation.
We know dangerous silences too, seething with an anger
that pours from our closeness and expresses itself,
tightly wound, as it passes through us.
We communicate this only too effectively
and may break ourselves, before this silent storm.
Speech could not help us anyway, it's violent words
threaten only to separate us, to blow away the vestiges
of how we want to remain.
http://pub.lucidpress.com/5b3c4293-297a-4775-8e5a-67dd9e4…/… 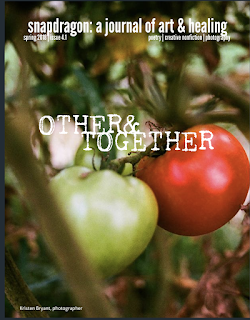