The Road To Pec

It was long before the war wreaked it’s destruction,

long before the massacres stole so many lives

that we decided to hitch hike to Pec.

Well, to hitch hike as far as Belgrade, that is.

You see, we knew the road

from Skopje to Pec,

knew it was impossible,

Had already gazed in alarm

at the rusting corpses of dead buses

scattered down the vertiginous hillsides.

So we took the overnight train from Belgrade.

Uncomfortable, but at least it was possible.

And then, some months later, we met someone

who had achieved the impossible.

His lift had dropped him

of the rocky road to Pec,

but he had seen enough

not to chance it further.

So he clambered down

onto the track made for donkeys

and continued his journey on foot.

There was a long way to go.

Two days later he came across a horse market.

One old horse was unsold.

It had a hollow back, he said

and was coughing up green stuff.

So laughing, they let him have it for fifty pence.

He never rode it,

but it carried his guitar

and on it’s good days,

his rucksack and tent.

And so it was that two weeks later they arrived in Pec.

He left the horse in a field and began to hitch

along the briefly asphalted road.

Something seemed familiar about the approaching car

that slowed and stopped, the driver was waving

and ready to greet him with the hugs and smiles

of a friend not seen for two weeks.

So together they resumed their journey

along the rocky road from Pec. 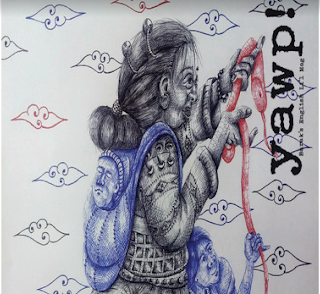