He’d heard that numbers of dolphins

had washed up dead

with pieces of plastic in their bellies.

And not the ubiquitous micro

He knew that dolphins were mammals

and that mammals were said to be

the most intelligent of sea creatures,

yet they ate plastic!

Sometimes plastic bits had been blown into his pond

and he’d tested them for food worthiness

and spat them straight out,

so tasteless and with a tough unpleasant texture.

that this was an option though.

He was concerned about Brexit

and wanted to make sure that

their stockpile of chocolate biscuits

was adequate to see him through.

When they gave him a luscious big piece

he always gave them a big wet kiss in return.

and really it was no trouble,

they were so sweet.

They’d told him that he was very old

and that the oldest goldfish

had lived for forty four years.

He didn’t think he was quite there yet,

but one thing he knew for certain,

when he did eventually sink into

the big pond in the sky,

no post-mortem would reveal

plastic pieces in his belly. 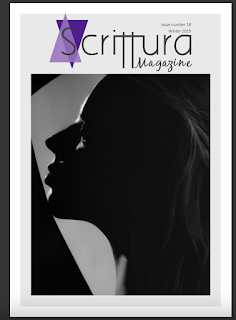