The first seeds were sown a long time ago.
When these small seed shells burst open
they were scattered locally.
They grew patchily at first, in Palestine, in Israel,
in Lebanon and throughout the Arab world.
There were only little streams to irrigate
and fertilize them, so they often failed to thrive.
But that was then.
Now the shells have grown bigger
and the seeds have flown further.
Further and further.
And the streams have grown wider and longer.
And more nutritious.

When the seed shells have burst in this century,
they found ground that was even more fertile.

So more and more has come under cultivation,
irrigated and fertilized now from rivers,
rivers of blood.
So well irrigated,
so well nurtured and tended that
the patches of brown soil became rare indeed.
But there were some.

Later the seeds spread wider over Gaza.
As larger seed shells broke and splintered
they found and colonised new areas
outside the brown patches
where it was now easy to germinate and thrive.
Now even trees could grow there and send out suckers
into the newly bloodied green places.
Soon there was a wood with dense undergrowth.
The rivers were torrents now
bloody torrents 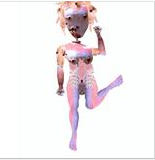 with plenty of irrigation channels.

Now more seeds have flown from Gaza.
Ever bigger seed shells are exploding and unloading
their crop of giant seeds.
The wood is a forest now,
a forest of giants now spreading their own seed
in the already fertile ground,
spreading it ever more thickly,
growing ever taller.
A forest of hate,
a writhing, spitting jungle
that we are unable to cut down